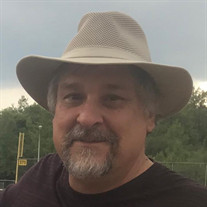 Mitchell G. Freel, 62, of Frankenmuth, Michigan, our loving, hardworking, father, brother, and friend passed away on February 21, 2021, at Ascension St. Mary’s. Mitch was born on May 17, 1958, to George and Shirley (Mason) Freel. Mitch attended several universities including Central Michigan University, Ferris State University, and Northern Michigan University before joining the Air Force. He finished his nursing degree at Laramie Community College in Cheyenne, Wyoming. During his 4 years in the Air Force, he was stationed at Warren Air Force Base, Cheyenne, Wyoming, where he met the former Denise Fales while attending church. They married on April 12, 1985, at the Warren Air Force Base Chapel. Mitch started his nursing career as a transport nurse for Roger’s City Hospital before spending the remainder of his adult life working as a dialysis nurse, most recently at Northern Michigan Hospital in Petoskey. He was passionate about his hobbies which included, hunting, kayaking, disc golfing, bicycling, and reading. All of these, however, meant so much more to him when he could share them with his friends and family. Mitch leaves to cherish his memory, his children, Nichole (Dave) Compau, Douglas (Erin) Hibbs, Brent Freel; grandchildren, Brooklyn, Chloe, Kinsley Compau, Elijah, Isla, and Sylvia Hibbs; siblings, Georgia Houser and Terry Crooks; as well as many cousins, nieces, nephews, and close friends. Along with his parents, Mitch was preceded in death by his loving wife, Denise Freel, who passed only 5 days apart from him. A Celebration of Life will be held on Thursday, March 4th, at Frankenmuth Bible Church. Memorial contributions may be directed to Sunrise Assembly of God Church in Rogers City, Michigan, or Frankenmuth Bible Church in Frankenmuth, Michigan, or the COVID-19 Solidarity Response Fund. Obituary lovingly submitted by the family. Private arrangements by Kind Cremations. Online condolences: www.KindCremations.org.

The family of Mitchell Freel created this Life Tributes page to make it easy to share your memories.

A comforting word from you means a lot.

Send comfort and support when it's needed most.